skip to main | skip to sidebar

Very interesting story here that compares Carter to Trump.  My book on Carter is mentioned,  The punk book argues that Carter really hit the skids by 1980 -- declaring war for protecting oil  You're watching the country move to the right just as a suburban punk movement started to gel.

The "Carterization of Donald Trump"
Posted by Kevin Mattson at 9:14 AM No comments:

WITH THE HELP OF THOSE MUCH BETTER THAN ME...

Please visit the "Top Ten Punk Songs" against the police here: Punks vs. Police
Posted by Kevin Mattson at 7:05 AM No comments:

THE POLICE AND THE BOOK!!!

Alright, the book long in the making -- We're Not Here to Entertain -- is about to come out, and I'm surveying the tragedies we're going through right now, and I'm thinking about how many 1980s punk songs focused on suspicions about the police.  So I've gone ahead and made:

Dead Kennedys, “Police Truck”: One of the best. Not just anti police but anti-macho.

Black Flag, “Police Story”: “A war we can’t win…”  Which was proven when the LAPD practically shut down every show they could.

The Dicks, “Anti-Klan,” with great opening line: “I see that you’re a policeman, I know you’re in the Ku Klux Klan” (before they moved to San Francisco, this band was from Texas!).  During 1980s protests, I remember the chant: “The cops and the Klan go hand in hand!”

The Dicks (yes they get two, because they were the anti-police band, just as much if not more than MDC): “Dicks Hate the Police.”  This one lasted, especially when Mudhoney covered it later on.

Red C, “Pressure’s On” (early political punk in D.C., with Tomas who would later lead the very political band, Beefeater.)  This is a great one with its shredded vocals.

Circle Jerks, “Back Against the Wall”: The futility of rebellion, much like “Police Story.”

Crucifucks, “Cops for Fertilizer” and get a hold of the album where there’s a recording of the police talking to the band’s leader about an upcoming show.  It ends with the following skirmish, “You guys… shouldn’t go so far out of your way to make fools of yourselves.”  To which, the authority figure on the other side retorts: “Well, that’s a matter of opinion.”  The band’s retort?: “It’s a matter of intelligence.”

The Vandals, “The Legend of Pat Brown” about a punk arrested for trying to run the cops down in his car.  Also featured in the movie Suburbia, the quasi-realistic depiction of suburban punk.

SS Decontrol, “Police Beat”: Slightly obvious, like much of the band’s releases.

MDC, “Dead Cops”: Even more blunt than SS Decontrol and clocks in below thirty seconds.


All of these angry songs can be found on youtube.  I'm not sure it's right to say "enjoy," maybe flex your anger muscles.
Posted by Kevin Mattson at 2:32 PM No comments:

The latest of this on-going history.  Yours truly is here...

trump nixon again
Posted by Kevin Mattson at 10:01 AM No comments:

The first interview about the next book

The first and hopefully not the last discussion of the forthcoming book, We're Not Here to Entertain: Punk Rock, Ronald Reagan, and the Real Culture War of 1980s America.  Appropriately on a podcast dealing with 1980s pop culture.  You can listen here (I come in after a beginning segment):

The 80its
Posted by Kevin Mattson at 8:00 AM No comments: 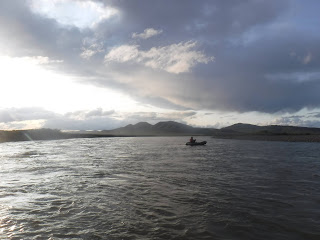 Posted by Kevin Mattson at 7:54 AM No comments:

I've been in the archives a long time now.  What I link to here is an article that I wrote for The Sixties Journal.  It's about Detroit as the geographical root for punk during the long sixties (and it's a long piece).  Presently, I'm revising the book about 1980s punk...  For now check this out: Leather Jackets for Flowers...
Posted by Kevin Mattson at 7:04 AM No comments: